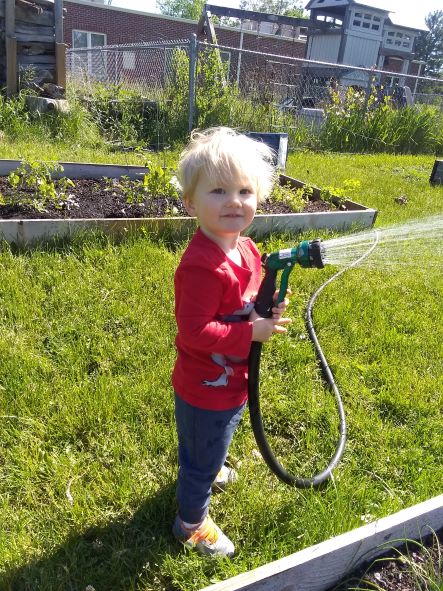 Lori connected with The GardenWorks Project in the fall of 2020. She had heard about the organization and its gardening program through the Birth to Three Program in West Chicago, and decided to submit an application.

At first, Lori’s family was approved for a GardenWorks Project balcony box, but they were excited to learn that, without access to land, her family was eligible to receive a space at a GardenWorks community plot near her home.

Even while processing changes, the process felt seamless for Lori.. “GardenWorks was really flexible, accessible, and easy to work with.” It wasn’t until last summer, though, that Lori and her now two-and-a-half-year-old son enjoyed a full season of watching plants grow. He delighted in helping his mom take care of it, too.

“In a little two-year-old way, he takes his watering very seriously,” Lori said. “Something about him picking the tomatoes himself makes introducing vegetables easier, having him more willing to eat vegetables because he’s participating in it.” He even eats Swiss chard and kale – with cheese, of course – in his scrambled eggs.

Before they grew it, they had never tried chard before. It was not something Lori even considered buying at the grocery store in case he did not like it.

“I’m not going to potentially waste money on something he’s not going to like or eat,” she said. “Because we watched it grow throughout the summer, he sampled it willingly and we both like it!”

Being in the community plots, the young family had the chance to get to know other gardeners and learn from them at a time when most people were indoors and craving community during the pandemic.

“It was so wonderful just to have a place to go that was outdoors, among others, but also felt safe,” Lori said.

According to the West Chicago resident, gardening is an accessible way to teach her son valuable life skills and instill values like patience, flexibility, gentleness and respect for the Earth.

“I think that if everyone took care of the earth around them, then the earth we are in contact with would be better cared for,” she reflects. “We can invest ourselves in the earth AND have delicious vegetables at the end!”

In a world of instant gratification, where groceries can be ordered without even going to the store, we have somewhat lost our connection to our food.  “Our gardeners not only get delicious fresh produce, but can rebuild their connection to the earth and their food - like Lori’s son who now eats kale and chard!” says Jeannie Iseman, The GardenWorks Project Executive Director. Between the flourishing veggies, household savings and the lessons imparted on her son, Lori wholeheartedly recommends GardenWorks.

“It’s a wonderful experience, you save money, it’s relaxing. I’m taking care of other people, animals, plants. It makes you feel kind, reflect on yourself in a positive way.”